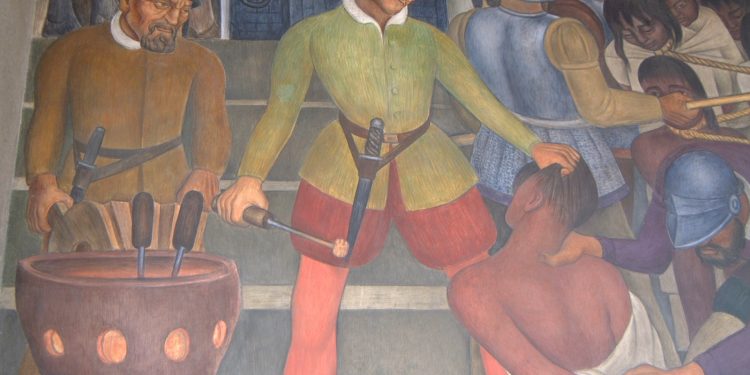 The Aztec empire reached its height in the early 16th century, under Emperor Moctezuma.   That was also the time that Spanish adventurers were swarming by the hundreds to the West Indies, following the discovery of the Americas in 1492 by Christopher Columbus.

The first contact with Mexico occurred in 1517, when explorer Francisco Hernández de Córdoba landed on the Yucatan coast. A subsequent expedition by Juan de Grijalva confirmed a land dominated by a powerful people who were despised by those forced to pay tribute to them.

The Spanish governor of Cuba, Diego Velazquez, then sent a larger force under Hernán Cortés, with instructions to trade with the inhabitants. Cortés had more ambitious plans, however, and after landing on the coast of Veracruz, in 1521, made his way to Tenochtitlán—today, ruins of the Templo Mayor archaeology site in the center of Mexico City—the then center of power of the Aztec empire, which was built in the middle of a lake.

Using a mixture of terror and persuasion, Cortés gained allies during his march toward Tenochtitlán. Moctezuma received the Spanish with honors, fearing that they may be gods, according to an ancient prophecy.

Problems began when Cortés had to leave the city to meet a Spanish force sent by Velazquez to arrest him. When he returned, the Aztecs were fighting to expel the Spanish. Cortés made Moctezuma go onto the roof of the palace to tell his people to withdraw, but the Aztec chief was received with a barrage of stones, wounding him. He died several days later, and under the war-like leader Cuitláhuac, the Aztecs continued their fight against the invaders.

The Spanish attempted to escape one night, known as the Noche Triste (somber night): they were discovered as they crept along one of the roadways that led out of the city, and a fierce battle ensued in which Cortés lost many of his men. Cortés afterwards took refuge with his Tlaxcalteca allies. In June 1521, Cortés started the final assault on Tenochtitlán armed with small ships to use on the lake, and with thousands of local Indian allies.

By August that year he had captured the city, and made a prisoner of the new Aztec leader Cuauhtémoc. Cuitláhuac had died in an outbreak of smallpox which decimated the local population.

Next: The Colonial Era