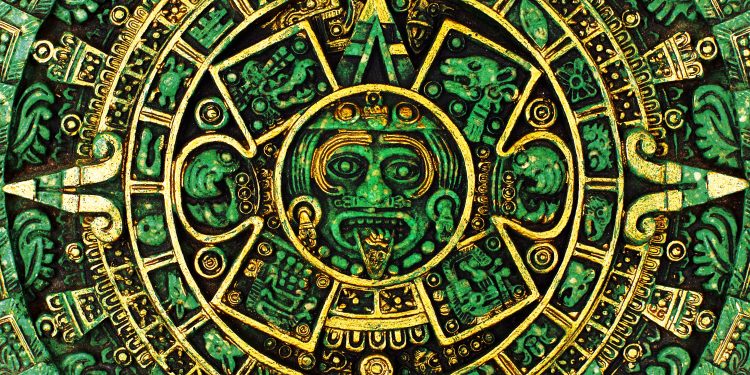 The first major civilization of Mesoamerica, the Olmecs, populated southern Veracruz state and parts of Tabasco on Mexico’s Gulf coast.

The main centers of their civilization were Tres Zapotes, San Lorenzo, and La Venta. The Olmecs flourished roughly between 1,200 and 200 BC, and are best known for the giant basaltic sculptures of heads, some of which are more than three meters high. The Olmecs developed forms of writing and a calendar system. They influenced surrounding peoples, probably through trading.

A number of Olmec influences, such as working with stone, observation of the stars and the worship of certain gods, were adopted by the Mayas, who dominated a large region including most of southern Mexico, Guatemala, Belize, and parts of Honduras and El Salvador.

The Mayas developed a more sophisticated system of writing, astronomy, and a base five numeric system that used the concept of zero. The Mayan civilization suffered some kind of catastrophe at the end of the Classic period (200 BC to 900 AD). After that, a new and brilliant Mayan period developed further north in the Yucatan peninsula.

Just north of modern day Mexico City lie the ruins of Teotihuacan, considered by some the most important of the pre-Columbian archaeological sites. The origins of Teotihuacan are uncertain, although it’s thought some of the inhabitants arrived from the Valley of Mexico to the south, refugees from the eruption of the Xitle volcano. Construction of the city probably started in the first two centuries BC, and the civilization reached its high point between 350 and 650 AD.

The following centuries were marked by invasions from the north. The Purepechas, or Tarascos, settled in the western state of Michoacan, and the Toltecs settled at Tula, north of the Valley of Mexico. Tula, like Teotihuacan, ended up being sacked by invaders, although the influence of the Toltecs extended as far south as Yucatan, more than 1,000 kilometers away.

The Aztecs, who are also known as the Mexica (pronounced “meh-SHEE-kah”), were nomadic, warlike people who arrived in central Mexico from the north in the late 13th century AD. They were not well received by the established descendants of the Toltecs, and wandered around the area for decades until 1344, when, according to legend, they received the sign that they should build their city Tenochtitlan. The sign was an eagle devouring a snake on a cactus patch. The eagle and snake remain the national emblem today.

By 1430, the Aztecs dominated the Valley of Mexico, (modern-day Mexico City) and in 70 years they expanded their territory to create the largest empire in the history of Mesoamerica. Only a few peoples were able to resist the Aztec onslaught: the Purepechas of Michoacan, the Tlaxcaltecas to the east, and some Mixteca tribes in the southern state of Oaxaca. The Aztecs used political alliances with neighboring peoples, as well as strict military training among their young men, to extend their empire.

Next: The Spanish Conquest