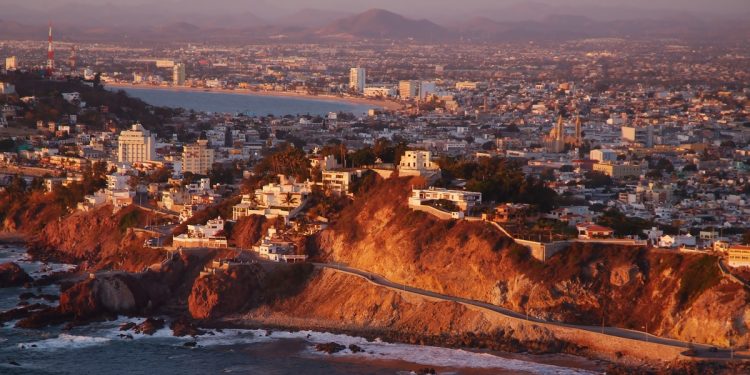 Research and assess Mazatlan as a location for living, working or retirement in Mexico.

Mazatlan is the northern-most resort city on the Mexican Riviera (situated along the Pacific Coast) and is Mexico’s closest mainland resort city to the USA. It is one of the most economical places in Mexico to take a vacation and it’s also host to one of Mexico’s largest commercial shipping ports.

Mazatlan’s rainy season runs from late May to October each year, with tropical storms, and on occasions hurricanes, landing here especially in late summer

*Relative to other foreign expat communities in Mexico

Mazatlan is socially diverse, and attracts people from many different countries and races. There is a strong contingency of chinese and italian people living here; although the city also attracts Americans, Canadians and some Europeans looking for an authentic Mexican town without the hyper commercialism of some other resort areas in Mexico.

The Centro Historico (Historic Center) has been undergoing a remarkable renaissance in recent years as property investors have bought up derelict colonial buildings and restored them to their former 18th Century glory. The city authorities are doing their part, too, by improving essential infrastructures such as water, drainage and the local electricity supply grid.

In addition to some fine residences, the historic center is also developing into a lively commercial and cultural center, offering art centers, theater, boutique stores, and fine restaurants situated alongside beautiful tree and flower-laden plazas and patios.

Mazatlan is one of Mexico’s most affordable vacation destinations and many Mexicans arrive here every year for their family holidays. The Zona Dorada (Golden Zone) is a stretch of sea-front properties — mostly hotels and condominiums — extending along some four miles of beach. It’s here where the tourists come to stay and spend their vacations, and some expats purchase condos with stunning views across the Pacific Ocean and Sea of Cortes.

To the south, this vibrant port city faces the Pacific Ocean, and facing north, the Sea of Cortes, a body of water shielded by Mexico’s Baja peninsula. The city’s geographical location — on the same latitude as Hawaii — provides year-round warmth without extreme heat or humidity.

Transport connections include an international airport with direct flights to key US cities (and onward connections to Europe and beyond); a highway leading north to Los Mochis (another port city and the terminus for the breath-taking Copper Canyon Train Journey), the US border. The road south leads to Puerto Vallarta and then to Guadalajara, Mexico’s second largest city. A twice-weekly ferry also makes a crossing over the Sea of Cortes to the city of La Paz, capital city of the state of Baja California Sur.

Due to its latitude, Mazatlan’s climate is more moderate than Mexican coastal cities located further south. The average daytime temperature is 82F/28C, and summertime humidity levels stay largely subdued in comparison to places like Puerto Vallarta and Acapulco.

Mazatlan is still considered a resort city ‘off the beaten track’ by most foreign investors and those who are looking to live and retire in Mexico. This situation provides a unique opportunity and affordability factor that other coastal cities on Mexico’s Pacific coast don’t offer anymore due to their popularity. In addition to being alongside the ocean, this city is totally authentic in style: the real Mexico lives and breathes here every day of the year.

Among the Most Affordable Beach Locations in Mexico

Living or retiring in Mazatlan is affordable – possibly the most affordable beach resort city on Mexico’s Pacific coast. Property prices have risen in recent years, but this is a city still in the early stages of a renaissance; in and around the historical center there still exists a mixture of developed and undeveloped colonial properties; and around the edges of the historical center are neighborhoods with ‘fixer upper’ properties being offered for sale — a sure sign that there is much more growth and development to come. The other affordability factor in Mazatlan are living costs: local shops, stores and prices are lower than other beach resorts in Mexico and smaller budgets stretch further: not just at the point of purchasing a property — but also when residents move in and start paying day-to-day living expenses.

Mazatlan has been experiencing a surge of inward investment over recent years: from Mexicans as well as foreigners. This is demonstrated in the renaissance of the historic center as well as the arrival of some new major hotel brands that are building and opening major new resorts south of Mazatlan.

At present, only two cities in Mexico can offer extensive conference facilities: Cancun and Mexico City. A new convention center recently opened in Mazatlan is Mexico’s largest, and it will attract a huge number of visitors to the city for expos and conferences; the expo center is spear-heading the efforts as Mexico positions itself as world-class venue for large meetings and expositions.

A multi-billion dollar investment being led by FONATUR, Mexico’s tourism investment agency, will create a major new resort area about a two-to-three hour drive south of Mazatlan. The area will also have its own airport, and the massive investment being made there will have a positive effect on Mazatlan proper.

A number of large developers are already creating luxury homes and condos in Mazatlan with extensive projects to supply the growing demand from new arrivals to the region, especially from foreigners seeking retirement and other lifestyle options in Mexico.

Overlooked Gem, About to Awaken

A couple of week’s visit to Mazatlan demonstrates that this is a city that has been overlooked by most foreigners for retirement and investment, and also one which is on the cusp of awakening to become an important resort city in Mexico as well as internationally.

There is no doubting the massive and continuous investment that is being made here today, and already the number of expatriate residents is beginning to increase as more people discover this resort and port city, that had been largely overlooked by foreigners seeking a place to live in Mexico and left undeveloped by investors since about the 1950’s.

The signs of development are apparent to those who have lived in Mazatlan for a decade or more; and the growth story appears to just be starting. Foreigners who are looking for a variety of property styles, a low cost of living and who want to live among an authentic Mexican environment will do well to consider Mazatlan — clearly an overlooked location on the cusp of a 21st Century renaissance.

Cost of Living in Mazatlan

The cost of living in Mexico is typically lower in Mexico than it is the USA, Canada and Western Europe, although precise costs depend upon where you live and your lifestyle choices.

To learn more about the cost of living in Mexico, connect to the Mexico Cost of Living page on Mexperience.

Regional and geographical cost variations do exist, and this part of the guide shows you how some goods and services at Cuernavaca vary from the average.

Banks, Banking and Credit in Mexico | Money in Mexico

Information about the real estate market in Mazatlan.

Prices of realty in Mazatlan have risen considerably over the last decade, although they still remain at very affordable levels when compared to properties in other Mexican resort cities. The re-development of the central historic district of the city is demonstrating the potential that exists for breathing life into old, ruined buildings, and transforming neighborhoods in and around the city’s central area. Prices have risen as the regeneration takes place, and further developments along the Golden Zone sea-front, as well as north and south of Mazatlan are ongoing.

Prices for real estate continue to hold for desirable properties overlooking the ocean and, as further planned development takes place, the supply of land for dwelling houses and constructed homes is likely to increase in the years ahead.

Most real estate is sold through local realty agents who know the area and the surrounding region, as well as directly through the developers marketing major realty projects, often on prime beachfront locations or on fine golf courses.

Real estate types range from beachfront homes, lots, and condos. There are also a number of time-share projects in and around Mazatlan, and especially in the tourist “golden zone” area of the city (note that time share is not ownership). Private residences (mostly re-sales) are available in the town center of Mazatlan as well as out-of-town, where investors are buying homes offering semi-rural surroundings and ocean and/or mountain views.

The central historical area — and especially the edges of same — exhibits a significant number of buildings in various states of disrepair and ruin and may provide an ideal investment for people who want to create their home by means of a colonial restoration project. Some properties have ‘for sale’ signs posted; others do not; contacting a local realty agent is the best way of finding out what the status of an old (ruined) building may be, and to negotiate the sale if the owner is open to offers.

Most rental properties in Mazatlan are offered through local realty agents or by individual property owners listing properties on the Internet or local newspapers and magazines as well as signs posted at restaurants, cafes and bars near the vicinity where the rentals are situated. Some developers rent out their units or rent out units on behalf of owners: check with local developers or a local realty agent for details and further information.

In addition to Mexico’s state sponsored healthcare provided via the country’s national health service IMSS, good quality healthcare services offered through private clinics with US-standard healthcare services exist in Mazatlán. The privately run out-patient clinics available locally are ideal for day-to-day ailments, sprains, broken bones and other health matters which would normally be diagnosed and treated by a General Practitioner of medicine.

Health and Healthcare in Mexico | Travel Health in Mexico

Mazatlan enjoys a yearly average temperature of 81F/24C. Winter months can be cooler and drop to 65F/15C at night; summer months may reach highs of 90F/30C in July and August especially.

January through March are the coolest months. Temperatures can range from 55F/12C to 79F/24C in the day.

April through June – springtime – are warmer months in Mazatlan with temperatures ranging from 60F/14C overnight to 88F/29C in the daytime.

July through September are the hottest months, with temperature ranging from 75F/21C overnight, to 95F/32C in the daytime. Temperatures and humidity reach their peak in mid-July and August.

Temperatures moderate again starting late September, any humidity disappears and the hot, sometimes humid, daytime temperatures climb down from their summer highs. Temperatures in the autumn months range from 59F/13C overnight to 88F/27C in the daytime.

Mazatlan’s rainy season runs from June to October, with most of the rain falling in July and August. Torrential afternoon rains may be experienced several days a week and, in the peak temperature months of July, August and September tropical storms may feature, too.

Hurricanes can affect Mazatlan, although the Baja peninsula can shelter this port city from the worst of Pacific hurricanes.

During the peak summer months of July and August, sea temperatures may reach as high as 80F/23C; in other months, the sea temperature will average around 65F/18C.

Weather and Climates in Mexico

Practical Information About Living in Mazatlan

This section contains links to guides where you can learn more about living in Mazatlan.

Guide to Money in Mexico | Banks & Banking in Mexico

How to insure your foreign-plated car in Mexico