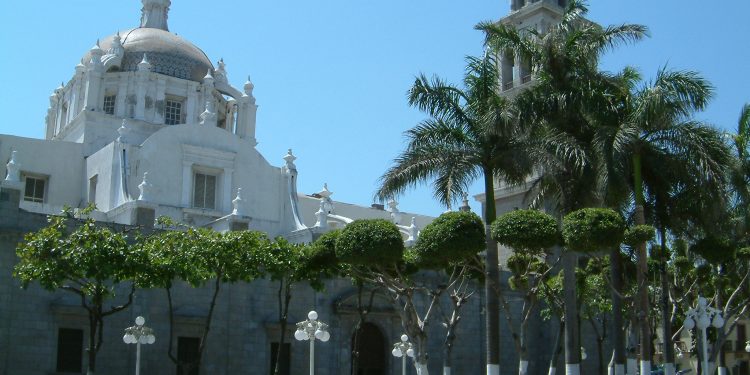 Research and assess Veracruz as a location for living, working or retirement in Mexico.

Veracruz on Mexico’s tropical southern Gulf coast, is the nation’s leading commercial port. The historic center is frequently likened to pre-revolutionary Havana, and though its colonial buildings lack the majesty of those of the Cuban capital, it is hot, bustling and funky for sure.

Veracruz’s rainy season runs from late May to October each year, with heavy tropical downpours in July and August

Veracruz is occasionally affected by hurricanes.

*Relative to other foreign expat communities in Mexico

Officially founded by the Spanish at the beginning of the 17th century, Veracruz claims to be the oldest city in the Americas. Not counting pre-Conquest cities, of which El Tajin is only one of several Totonac and Olmec sites where remnants of the ancient civilizations are preserved in Veracruz state. Four times, Veracruz has been dubbed “heroic” by Mexico’s federal government. Once for driving out the Spaniards from their fortress at Ulua (now a high spot on the tourist trail), once for fighting off the French, and twice for resistance to U.S. invaders.

Away from the Tourist Trail

Unlike most other popular retirement spots in Mexico, Veracruz is very much a working city. Tenaris, the world’s leading producer of pipes for the oil industry, has a major plant just outside the city. Tourism, though important, is a sideline. And that is just part of the charm for those seeking the “real” Mexico. Even when tourists flood into Veracruz, as they do each year during school holidays – especially at Easter – and for the annual carnival, they are overwhelmingly Mexicans.

At this point, some nomenclature would be handy. To distinguish it from the surrounding state of the same name, the city is commonly referred to as El Puerto de Veracruz (the Port of Veracruz), or simply “El Puerto”. To complicate matters yet further, what most people call “Veracruz” or “El Puerto” is a conurbation.

About quarter of a century ago, Boca del Rio was a tropical village of palm-frond shacks and beach restaurants, with nothing to interrupt the fishermen as they dozed in their hammocks with a six-pack by their side. No longer. The swathes of farmland that once separated Veracruz from Boca del Rio have long been swallowed up by modern developments. These days, Boca is where it’s at for luxury hotels, modern apartment buildings, shopping malls and discos. Scarcely a hammock in sight, and most six-packs are tucked out of sight in the trunk of a Volvo.

For almost all purposes, Veracruz and Boca are one and the same. Neither, however, is the state capital. That honor is reserved for Jalapa (sometimes spelled Xalapa), a university town with all the trimmings, including museums, a symphony orchestra and a rich program of cultural events. Jalapa is about an hour and a half by car from Veracruz, or two hours by bus. With its surrounding coffee estates, many open to visitors, Jalapa’s altitude can provide a refreshing break from the mid-summer heat of Veracruz.

Low Cost of Living in Veracruz

One of the big attractions of living in Veracruz is that costs tend to be much lower than in most retirement spots, or in the cities of Mexico’s industrial north. Everything from beer to taxis and dental treatment cost a fraction of the going rates in the U.S., Canada and Europe.

Veracruz, however, has many upscale residents and there is shopping to match. Branches of Sam’s Club and Costco do a roaring trade. Supermarkets abound: Wal-Mart is here and so are its principal Mexican competitors, Soriana, Mega and Veracruz’s very own Chedraui. Department stores and boutiques are heavily concentrated in shopping malls, of which the leading one is Chedraui’s Plaza Las Americas at the Boca end of town. Didier Drogba, a millionaire Premier League superstar, recently flew over from London … just to buy a watch he particularly wanted at a boutique in Las Americas. For those unfamiliar with soccer, by the way, Drogba is to his sport roughly what A-Rod is to baseball.

But if “authenticity” is what you want when you go shopping, head to the Veracruz central market. Almost every herbal remedy, fruit, vegetable and cut of meat that you’ve ever seen is on display, as well as more than a few that you probably haven’t. Just don’t ask the guy with a dead iguana slung over his shoulder what he proposes to do with it. Fine dining is not exactly a strong point of Veracruz, but seafood is. Try Villa Rica by the Mocambo beach or one of several what used to be the village of Boca. Cacharrito’s, an Argentine joint as you enter Boca from Veracruz, is recommended for meat lovers. Check-out the breakfasts at the Zaragoza market.

Veracruz is connected to Mexico City by a modern, four-lane, highway. The journey time takes about three hours by car; around four hours on a first-class bus. The city’s bus station is a major regional hub, offering connecting services to all other major towns and cities in the state of Veracruz as well as services which run north and south along Mexico’s Gulf Coast. The city’s international airport, located some six miles southwest of the center and offers frequent connections to Mexico City as well to a few U.S. cities, most notably, Houston, TX.

Attractions Along the Gulf Shore

Modern sewage treatment plants have cleared up pollution on the city’s beaches, but they still aren’t great. Keen swimmers might prefer the municipal Leyes de Reforma complex with three excellent pools, one of Olympic dimensions, where senior residents can swim at any time until swim-club training begins late afternoon, for a small stipend each month.

Downtown dive shops offer trips to offshore reefs for scuba and snorkel enthusiasts, though aficionados say the diving is better at Anton Lizardo, about half an hour from downtown.

Fine beaches – Chachalacas, for example – and adventure sports such as canoeing and white water rafting, are among other out-of-town attractions in a state with more than its fair share of natural blessings. And history. This is where Hernan Cortes and his expeditionary force first landed in the mainland of the Americas. As gold from the Aztec empire was shipped out by the boatload to the Old Country, the Conquistadors dubbed it La Villa Rica de la Vera Cruz (The Rich Town of the True Cross).

Veracruz is a perfect ‘short list’ location for people who want to live and retire in Mexico away from the popular tourist cities and resorts which have become, in some instances, almost overwhelmed by foreign expatriates.

Veracruz is a working port city; a conurbation on Mexico’s Gulf Coast that can be hot and humid, but which is also susceptible to the cold Nortes: northerly winds which blow down the coastline during the winter months.

Notwithstanding the climate, the city offers foreign residents an opportunity to enjoy one of Mexico’s most charismatic and most vibrant cities; authentic with modern comforts; extremely affordable; friendly and easily accessible by road and air.

Cost of Living in Veracruz

The cost of living in Mexico is typically lower in Mexico than it is the USA, Canada and Western Europe, although precise costs depend upon where you live and your lifestyle choices.

To learn more about the cost of living in Mexico, connect to the Mexico Cost of Living page on Mexperience.

Regional and geographical cost variations do exist, and this part of the guide shows you how some goods and services at Cuernavaca vary from the average.

Banks, Banking and Credit in Mexico | Money in Mexico

Information about the real estate market in Veracruz.

Prices of realty in Veracruz, as elsewhere in Mexico, have risen over the last decade, although they still remain at very affordable levels when compared to properties in popular Mexican resort cities.

Prices for real estate continue to hold for desirable properties overlooking the Gulf and, as further planned development takes place, the supply of land for dwelling houses and constructed homes is likely to increase in the years ahead.

Most real estate is sold through local realty agents who know the area and the surrounding region, as well as directly through the developers marketing major realty projects, often on prime beachfront locations or on fine golf courses.

Properties in Veracruz range from beachfront homes, lots, and condos. There are also a number of time-share projects in and around Veracruz, and especially in the tourist area of the city, Boca del Rio (note that time share is not ownership). Private residences (mostly re-sales) are available in the historic town center of Veracruz as well as out-of-town, where investors are buying homes offering semi-rural surroundings and ocean and/or mountain views.

Most rental properties in Veracruz are offered through local realty agents or by individual property owners listing properties on the Internet or local newspapers and magazines as well as signs posted at restaurants, cafes and bars near the vicinity where the rentals are situated. Some developers rent out their units or rent out units on behalf of owners: check with local developers or a local realty agent for details and further information.

In addition to Mexico’s state sponsored healthcare provided via the country’s national health service IMSS, good quality healthcare services offered through private clinics with US -standard healthcare services exist in Cuernavaca. The privately-run out patient clinics available locally are ideal for day-to-day ailments, sprains, broken bones and other health matters which would normally be diagnosed and treated by a General Practitioner of medicine.

Health and Healthcare in Mexico | Travel Health in Mexico

Veracruz enjoys a yearly average temperature of 76F/21C. Winter months can be cooler and drop to 57F/14C at night; summer months may reach highs of 95F/33C in July and August especially, accompanied by drenching humidity.

November through January are the coolest months. Temperatures can range from 57F/14C to 79F/24C in the day.

February through April – springtime – the weather begins to warm up in Veracruz, with temperatures ranging from 63F/16C overnight to 90F/31C in the daytime during late spring.

May through September are the hottest months, with temperature ranging from 75F/21C overnight, to 95F/33C in the daytime. The rainy season begins in late May and torrential downpours are common during July and August; the high temperatures do moderate in these months, as the rains cool things down although the humidity levels soar. Temperatures and humidity reach their peak during September and October.

Temperatures moderate again starting in October, the humidity passes and the hot, humid, daytime temperatures climb down from their summer highs. Temperatures in the autumn months range from 66F/18C overnight to 88F/27C in the daytime.

Veracruz’s rainy season runs from May to October, with most of the rain falling in June, July and August. Torrential afternoon rains may be experienced several days a week and, in the peak temperature months of July, August and September tropical storms may feature, too.

Hurricanes from the Gulf of Mexico can occasionally affect Veracruz.

During the peak summer months of June through September, sea temperatures may reach as high as 85F/25C; in other months, the sea temperature will average around 65F/18C.

Weather and Climates in Mexico

Practical Information About Living in Veracruz

This section contains links to guides where you can learn more about living in Veracruz.

Guide to Money in Mexico | Banks & Banking in Mexico

How to insure your foreign-plated car in Mexico